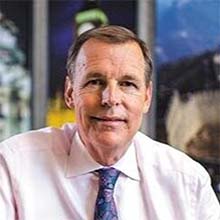 Michael Brown is the co-founder, Chief Executive Officer and Chairman of the Board for Euronet Worldwide, a leading processor and innovator of secure electronic financial transactions. Mr. Brown actively participates in the day-to-day operations of Euronet through oversight of the Company’s business strategy, development and financial performance across all markets.

Euronet operates three segments which process more than $115 billion in annual payments volume through approximately four billion transactions delivering $2.5 billion in revenue annually. The EFT segment processes transactions for a network of approximately 47,000 ATMs directly and provides transactions and products for another 135,000 ATMs. Along with the ATMs, Euronet runs approximately 307,000 POS terminals in 54 countries worldwide. The epay segment provides electronic distribution of prepaid mobile airtime and other electronic products on a network of 700,000 POS terminals in 325,000 retailer locations across 51 countries. The money transfer segment provides cash-based and online global money transfer services for individuals and small-to-medium sized businesses through a network of 385,000 locations serving 160 countries. With headquarters in Leawood, Kansas, Euronet employees approximately 7,600 employees in more than 50 countries around the world.

Mr. Brown is an accomplished entrepreneur with 30 years of combined experience in the computer software and electronics payments business. In 1979, he founded and was CEO of Innovative Software which developed integrated business software, primarily for personal computers. In 1988, Innovative Software merged with Informix, a leading provider of advanced database software technology. During his time at Informix, he served as president and chief operating officer as well as president of the workstation products division. With his oversight, Informix revenues grew from $70 million to $170 million before his departure in 1990. In 1993, he was a founding investor of Visual Tools, a company that writes and markets component software for the Visual Basic and Visual C++ developer market. Visual Tools was acquired by Sybase Software in 1996. Mr. Brown received a Bachelor of Science in electrical engineering from the University of Missouri-Columbia in 1979, and a Master of Science in molecular and cellular biology at the University of Missouri-Kansas City in 1997.