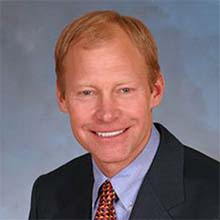 S. Curtis Johnson received his B.A. in Economics at Cornell University and an MBA at the Kellogg School of Management at Northwestern. Mr. Johnson has served on the Board of Directors of Cargill, Inc. and the World Wildlife Fund.

He is involved in a variety of entrepreneurial ventures. Most importantly, he was the co-founder of a private venture capital firm, Wind Point Partners, in 1983. Wind Point Partners is now investing its 9th Fund after raising a cumulative $4.9 billion from various significant institutional investors, including Northwestern Mutual and the State of Wisconsin and State of Michigan Investment Boards. Wind Point has consistently performed in the top quartile performance ranking of all Private Equity funds.

As a fifth-generation member of the S.C. Johnson family, Mr. Johnson has held various leadership positions within the family business. He has a passion for sustainable businesses with a focus on improving the environment. As Chairman of Diversey, Inc., a $4 billion global institutional cleaning business, he led the development and successful implementation of a variety of environmentally friendly cleaning solutions for foodservice companies, hospitals, building service contractors, and cleaning products distributors worldwide.

Mr. Johnson’s personal story includes overcoming addiction and helping others do the same. He has partnered with the former sheriff of the Kenosha County (Wisconsin) Correctional Facilities to develop and build a halfway house program called “Living Free House” that provides a continuity of support to recovering alcoholics and addicts leaving the correctional system.

An avid pilot and aeronautical adventurer, Mr. Johnson is an experienced diver and rated in various fixed-wing, rotorcraft, glider, and lighter than air aircraft. He is currently a world-record-holding skydiver. In 2000, along with his brother Fisk and Father Sam, he re-traced his Grandfather’s famous Carnauba Expedition from Racine, Wisconsin to Brazil and up the Amazon River in a 1934 replica Sikorsky S-38 Flying Boat that was used by his Grandfather in his original expedition in 1934.