Alstom launched its Coradia iLint hydrogen-powered trains in 2016 by adapting a diesel design with a range of 621 miles. ALSTOM 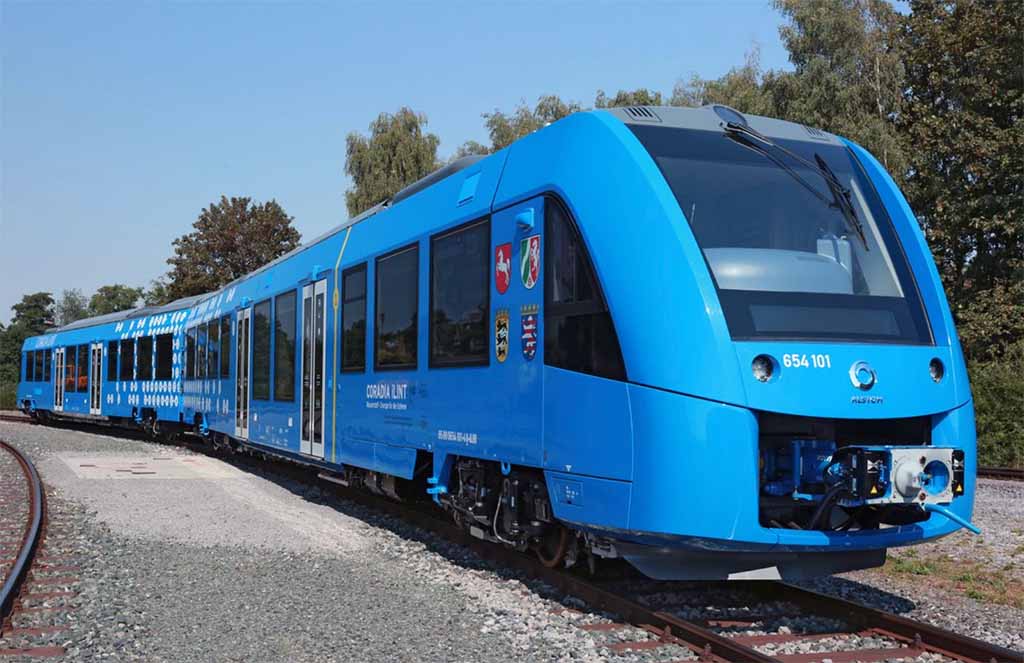 For all the buzz about hydrogen trucks and planes, railways provide the most immediate test case for the rollout of a clean-energy technology that has electrified policy makers and markets alike.

Investors got very excited about the potential of hydrogen as a sustainable fuel last year, but have taken a breather in recent months—as they have with other speculative technology themes. The fact remains that, for many industries, so-called green hydrogen produced using renewable power needs about a decade of scaling up and rising carbon prices to make it competitive.

Yet that isn’t the case for rail transport. Hydrogen-powered trains built by France’s Alstom have already carried passengers over 110,000 miles on trial operations in Europe. The total lifetime cost of ownership is already comparable for trains running on diesel, hydrogen fuel cells or electrified lines, according to a report by consulting firm Roland Berger.

Hydrogen is best seen as a substitute for dirty diesel, still used on about half of Europe’s rails and most in the U.S. The gas is particularly useful on routes that aren’t busy enough to give priority to overhead electrification, but are too long for batteries alone. Alstom’s hydrogen trains are new, but existing diesel ones can also be retrofitted.

The technology faces the classic chicken-and-egg conundrum: Suppliers hesitate to build the big clean-production facilities needed to bring down costs until demand is more certain, while most customers are waiting for lower prices before switching fuels. Trains can help unblock the market because they offer an unusually predictable, long-term source of demand. Government incentives will also accelerate development.

While oil and gas giants Shell, BP and Total see a promising future business in hydrogen, in the near term it is the industrial gas producers— Air Liquide , Linde and Air Products— who are investing billions to scale up.

“We want to focus on the big industrial bases and mobility corridors in order to build the infrastructure. Trains are a good base load and a good target for us,” said Matthieu Giard, Vice President at Air Liquide. “We know when they start and arrive, go from point A to B, and the frequency. It is way easier to develop infrastructure for trains than for trucks.”

Alstom launched its Coradia iLint hydrogen-powered trains in 2016 by adapting a diesel design. The electric engine runs on a hydrogen fuel cell and energy captured from braking, which is stored in onboard batteries. It has a range of 1,000 kilometers (621 miles). The trials convinced train operators in Germany and France to place orders, with deliveries starting next year. Discussions are ongoing with many others, said Mike Muldoon, head of business development at Alstom.

Alstom has an early lead, but others expect to deliver rival products over the next few years. Spain’s CAF, Germany’s Siemens and Switzerland’s Stadler are all developing new models for Europe.

Hitachi is working on a hybrid for Japan. In North America, Stadler is designing hydrogen-powered trains for San Bernardino transit, while Canadian Pacific Railways is replacing the diesel engine in an existing train with fuel cells designed by hydrogen darling Ballard to test the technology for wider use.

The market is still developing but it is a rare one where the economics of hydrogen currently stack up. The big transportation innovation of the 19th century may be an important incubator for the clean fuel of the 21st.